Buy My Books on Amazon

Editor’s note on “Where The Heart Is”: “Regular Mythaxis readers will be long tired of the editor’s observation about stories that seem to come in pairs, but I’m doing it again. Despite their differences, Alexander Zalben’s tale feels like a thematic sibling to ‘An Odd Recurring Dream’ — despite their commonalities, they go in very different ways.“

Stories reveal our lives and times. This widely-read international collection entertains and informs its readers four times per year with over a hundred pages of stories, poems, and more. Be the first to read each new issue of the London Reader with this early-release Kindle subscription edition! Featuring great stories from thought-provoking perspectives, the London Reader presents contemporary voices in creative writing. The short stories, poems, essays, art, and interviews in each issue are curated, as in a gallery, in order to explore a single theme or topic.

Get it on Kindle

Christmas: the very word evokes warm, familiar memories. The smell of Grandma’s cinnamon cookies, the handmade ornaments that deck the tree—much of the holiday’s joy springs from well-worn traditions and past celebrations. But how do you embrace the season when nothing is familiar?

From frozen Siberia to sunny Costa Rica, a glistening ice hotel to an endless red-eye flight, this issue explores the heartaches and delights of an abnormal Christmas season. Join our protagonists as they seek comfort on a lonely Christmas morning or use what’s at hand to celebrate in a new way. Who knows? Perhaps a chance encounter with a stranger or a family member will unearth holiday joy that would never have been found at home.

Get it on Kindle (FREE)

Las Vegas, Nevada: a city with so much to offer and so much to hide. The Mirage with its hellfire and brimstone. Paris with its ceilings painted in a continuous day. The rhythmic and hypnotic motion of the Bellagio’s fountains. A city with everything one might want and then some. Thuggish Itch’s first collection, Viva Las Vegas, contains sixteen horror and sci-fi stories from sixteen inspired authors, all of which delve beneath the city of Las Vegas’s bright lights and serve up a glimpse of what may lie within.

Get it in Print or on Kindle (FREE)

Third Flatiron presents “Galileo’s Theme Park,” a new anthology of science fiction, dark fantasy, horror, and humor. Twenty short stories by an international group of authors explore how the universe has changed since Humanity took a closer look at the stars. Journey with us on a speculative expedition to the lands beyond Earth opened to us by Galileo’s telescope.

Are we alone in the universe? Third Flatiron’s new speculative fiction anthology, “Galileo’s Theme Park,” explores themes such as space exploration and adventure, religion, and cosmology. A flash humor section, “Grins and Gurgles,” is also featured.

Get it in Print or on Kindle (FREE)

In this issue, EC features stories that use the magic of summer and summer nights as the backdrop to the nine tales below. Here, you’ll find some traditional fairy tales and re-tellings of folktales and myths, along with some modern stories that evoke the feeling of warm days under the sun and cool nights under the stars.

Where does a Sound Seeker find words thought lost forever?
Why should one never eat Ladybug cakes, even if they’re dripping in delectable icing?
How can the Monarch of the Rains transform himself into something a princess can love?
When a goddess decides to go home, who can stop her?
And how can catching a golden bird be the key to a kingdom?
...plus more stories to enjoy on an afternoon when the sky is an endless blue and summer stretches beyond the horizon. 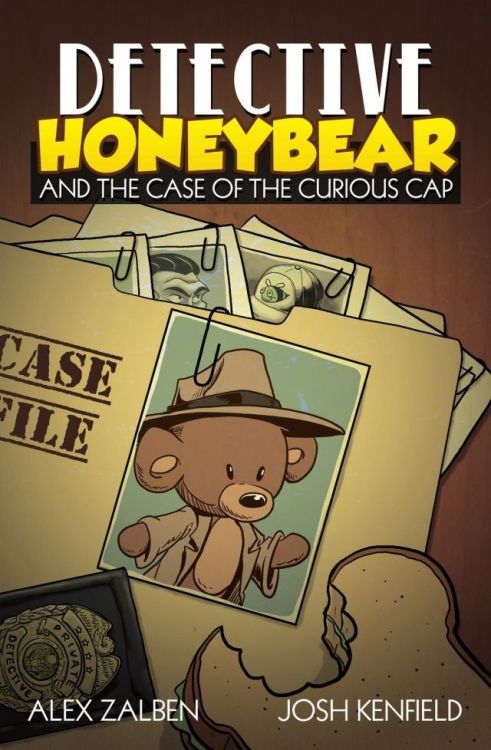 DETECTIVE HONEYBEAR AND THE CASE OF THE CURIOUS CAP
Detective Honeybear is an adorable bear detective in a noir, mystery world. Join him and his partner Detective Chance as they try to solve the case of the curious cap!
Get it FREE On Comixology 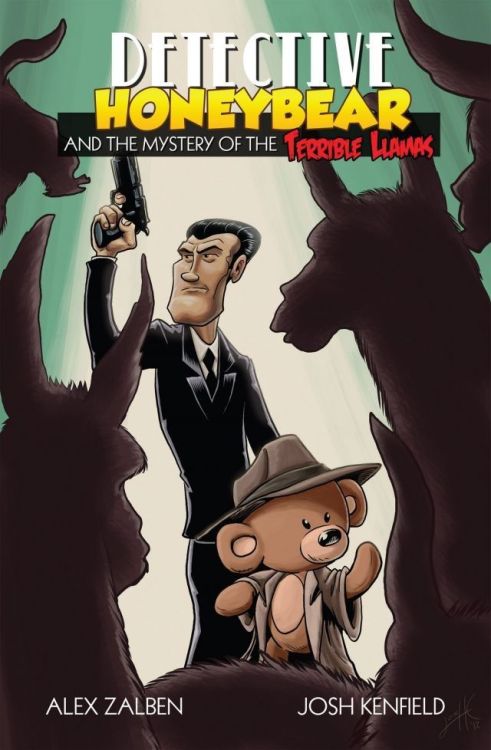 Get it on Comixology 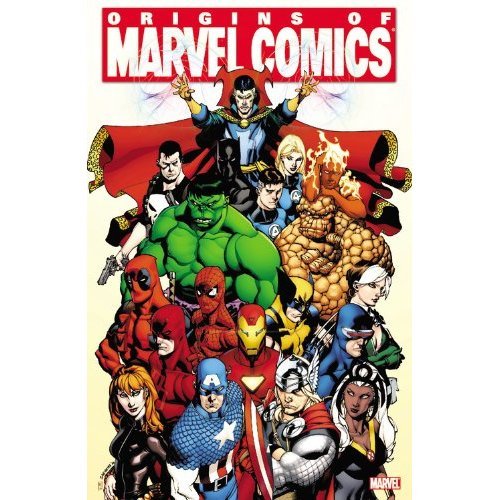 ORIGINS OF MARVEL COMICS
Reprint of the first two pages of Thor and the Warriors Four #1, written by Alex Zalben, Art by Gurihiru. Released May 11, 2011.

Get it On Amazon.com 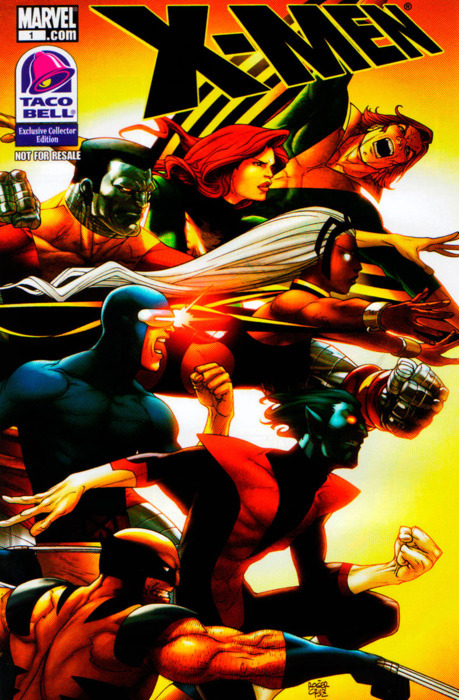 Released as a promotional item at Taco Bells nationwide in January of 2011. 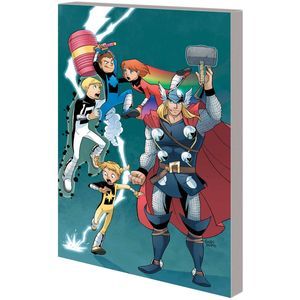 THOR AND THE WARRIORS FOUR DIGEST #1
COVER BY: Gurihiru
WRITER: Alex Zalben
PENCILS: Gurihiru
THE STORY:
Power Pack’s biggest adventure ever begins, as they desperately search for the only person who can save the life of their grandmother – THE MIGHTY THOR! But first, they’re going to need to get to Asgard, and that means joining forces with Frog Thor and THE PET AVENGERS! An epic tale that starts with a book of myths and ends with the destruction of the entire world, this is a journey into mystery that will leave Power Pack changed – forever! Collecting THOR AND THE WARRIORS FOUR #1-4. All Ages …$9.99 ISBN: 978-0-7851-4120-4

GET IT ON MARVEL.COM

GET IT ON AMAZON.COM 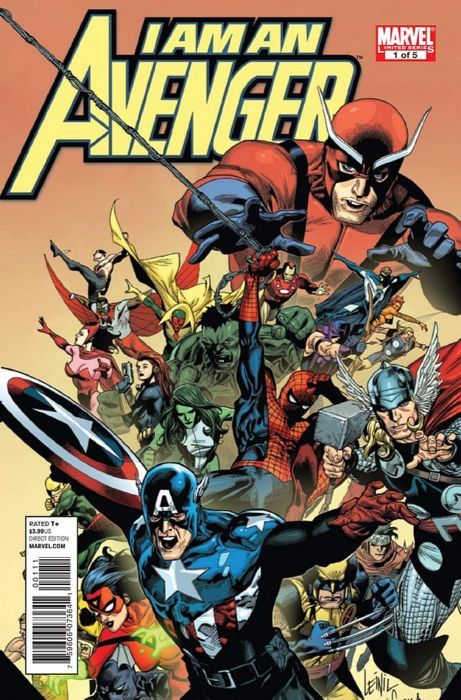 THE STORY:
What is it that makes one an Avenger? That’s what this series starring characters from all across the Avengers’ history will attempt to answer! Featuring tales of Iron Man, Captain America, the Thing, Iron Fist, Justice, Firestar, Squirrel Girl, Nova and the Young Avengers and more! Rated A …$3.99

Read it at Marvel.com! 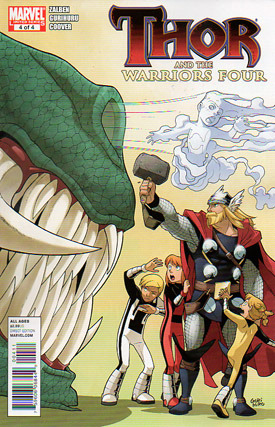 THE STORY:
Loki: triumphant! Thor: defeated! Power Pack: no more! Exclamations: And questions? Will Power Pack be able to save the life of their grandmother, or will the world be destroyed first? All this, plus a guest appearance by The Pet Avengers, and the moment you didn’t know you were waiting your whole life for: The League of Thors! AND the final chapter of Colleen Coover’s Hercules/Power Pack cross-over. An issue so big, so funny, so awesome, that critics are saying, “This solicit was actually written before the first issue came out, so there’s no press quotes yet!” 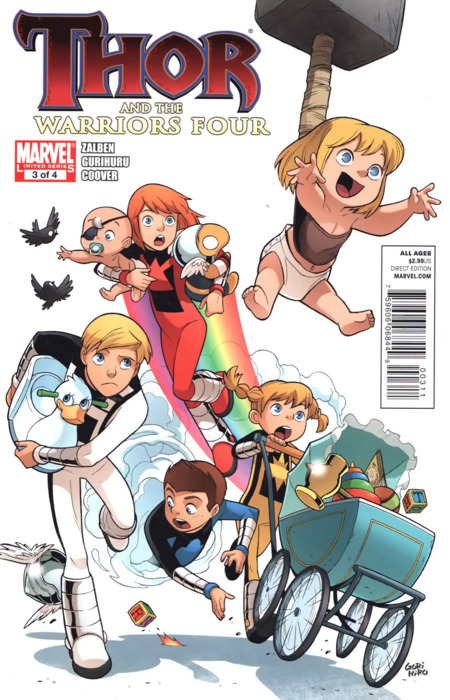 Oh noes! All of Asgard has been turned into tiny little babies! Volstagg? Baby! Sif? Baby! Odin? Teeny, tiny wittle baby. Now, it’s up to Power Pack and Thor, Tot of Thunder to set things right. Meanwhile, Julie makes a fateful decision that may just play into Loki’s evil plans, and Alex reaches his breaking point. Will this be the end of Power Pack? All this, plus Ratatosk, Squirrel of Mischief: the second most dangerous squirrel in the Marvel Universe! PLUS: Hercules continues the tale of his twelve labors! Rated A …$2.99 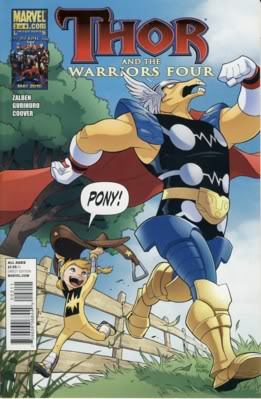 THOR AND THE WARRIORS FOUR #2 (of 4)
Written by ALEX ZALBEN
Cover and Art by GURIHIRU
Hercules backup by COLLEEN COOVER
Who are the WARRIORS FOUR? What do they want with THE MIGHTY THOR, and his alien pal BETA RAY BILL? And how does a no-holds-barred stone throwing contest feature in all of this? The answers: 1) They’re POWER PACK! 2)They want magical Golden Apples to save their grandmother’s life, and 3)who doesn’t like a good stone-throwing contest? The adventures of Power Pack continue as they reach Asgard, fight Dark Dwarves alongside Thor, and move one step closer to bringing about the end of everything they hold dear!
Rated A …$2.99 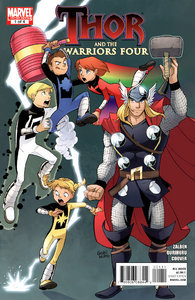 THOR AND THE WARRIORS FOUR #1 (of 4)
Written by ALEX ZALBEN
Pencils & Cover by GURIHIRU
It all starts here! Power Pack’s biggest adventure ever begins, as they desperately search for the only person who can save the life of their grandmother – THE MIGHTY THOR! But first, they’re going to need to get to Asgard, and that means joining forces with Frog Thor…And THE PET AVENGERS! An epic tale that starts with a book of myths and ends with the destruction of the entire world, this is a journey into mystery that will leave Power Pack changed – forever!
32 PGS./All Ages …$2.99

Newsarama: From Comic to Comics: Alex Zalben on His THOR Limited Series

Check It Out on Marvel.com! 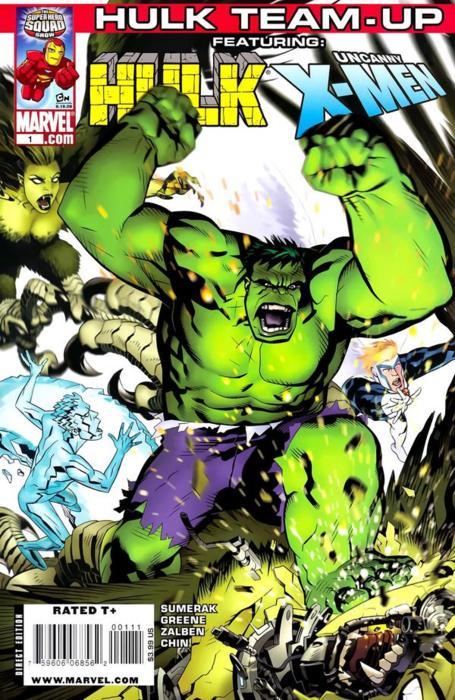 “Too bad Hulk Team-Up #1 is just a one-shot, because it’s so much fun that I’d love to see it as a series. The backup story, Alex Zalben and Joyce Chin’s “Smash Hit,” is less about heroics and more about humor, as the shy Banner becomes the object of Dazzler’s affections… Its overall good-naturedness makes it impossible not to warm up to!” – Bookgasm.com

“The X-Men and the Hulk don’t really seem like a natural pairing, but “Hulk Team-Up” really manages to make it work!” – Comic Book Resources

“…The real delight is the Hulk & Dazzler piece by Alex Zalben + Joyce Chin. It’s short, but suitably poignant and appropriate for both characters.” – Zodar Zone

“This story is freaking hilarious. I loved everything from the song lyrics, to the creepy helpful bartender that follows Bruce to the concert because he likes to see things through. The name of Dazzler’s opening band was awesome. I really enjoy Zalben’s sense of humor. I hope that he gets more chances to write comics. I think his style would be perfect for Booster Gold or even She-Hulk.” – Examiner.com

Check It Out on Marvel.com!